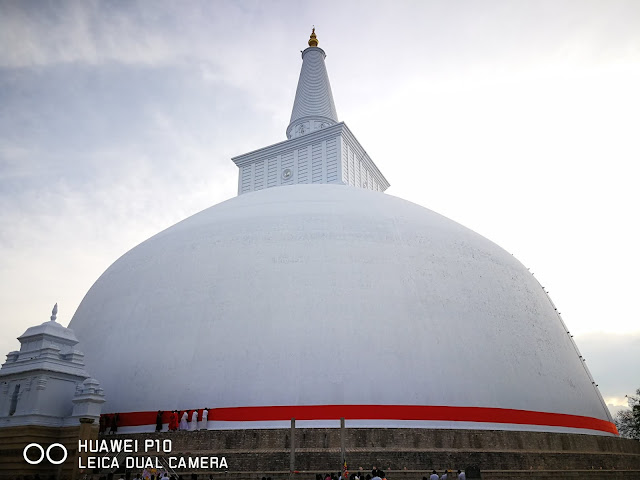 One of the Atamasthans in Anuradhapura, this temple is a beautiful dagoba in a beautiful setting, adored by Buddhists and non-Buddhists. Its Buddhist symbolism is admired by people all over Sri Lanka for its beauty. The Ruwanweli Maha Saya, which symbolizes the lake and the Dagoba that enlighten the Buddhist thought inherited from the Sinhalese people, is highly revered.

Swarnamali is so named because it was built at the place where the goddess lived. This is done in the sacred place where the four Buddhas are seated. During the Parinirvana of the relics, the relics of the Buddha were created on this dagoba and displayed for a moment. By the power of Irdhi, the treasures were brought from the northern island and the Ghanaran statues were taken from the world of the cobras and made by King Dutugemunu in the year 383 AD in the year 383, encrusted with about a dozen Sarvagh relics and priceless gold, silver, pearls and gems. King Dutugemunu completed the Mirisawetiya Stupa and the Lowamaha Palace.

Subsequently, Ruwanweli Seya was determined to create. The first thing the king did was to assemble the building material. There is a miraculous description in this regard in the Mahavamsa. After collecting the building materials, the construction work of the Great Stupa commenced on the 15th day of the Vesak month party at Visakha Nekath.

First, the foundation was excavated. It was cut to a depth of 7 cubits, and the bottom was covered with stone powder, which was then trampled underfoot by animals covered in skin and compacted. The king laid plaster on it and laid an 8-inch-thick sheet of metal to complete the foundation. In the Mahavamsa this work is referred to as Parikamma.

The foundation stone of the stupa was then laid. For that, the king first made a garment offering. All this was done with the help of the Sangha. The king also followed, turning the pre-finished gold-plated silver consumption rod to mark the ground.

A specially nominated minister laid a brick in a mortar and pestle. Afterwards, the king worshipped, performed poojas for the monks and completed the laying of the foundation stone of Ruwanweli Seya.

The king then summoned 500 tile carpenters and selected an intelligent and learned man from among them.

King Dutugemunu fell ill before the construction of the dagoba began and was completed. After that, his brother King Saddhatissa had to complete the industry. King Dutugemunu's illness worsened day by day. The king was anxious to see the end of the Seya. It was decorated with wood, covered with a white robe, arranged in the manner in which the work of the great palace was finished, and shown to the king. The King was overjoyed and breathed his last in the midst of the Parit Sangayana of the Maha Sangha. After that, the King's brother completed the work of the Great Palace.

This arrangement is stated in the Mahavamsa as follows. Limestone was brought in, blacked out, covered with leather, and the elephants mounted on it, and the mortar and stones brought in from the banks of the river were laid on top of it. Prepared and laid the wedding stones for the Great Seya Wall. According to the plan, the dagoba is finished in a bubble shape.

After King Saddhatissa, the kings Wattagamini, Sirinaga and Voharatissa who worked for the development of this dagoba get an important place. At the top of this seam was the jatra. The square fort was built by King Sangatissa. At the same time, a crystal was encrusted with gemstones and a gem ring was placed around the tower. The Mughalan king offered a robe to cover the dagoba. King Kasyapa II also erected a gemstone tower at the top of the pillar. A tower made of gold was offered by King Mahaparakramabahu.

In the late 13th century, the Kalinga king Magha caused great damage to Ruwanweli Seya. It was rebuilt by King Parakramabahu IV. It was later dilapidated and was renovated in 1870 under the leadership of Ven. Naranwita Sumanasara Thero. In the year 1902, the Great Chaitya Development Company was started here under the leadership of Mr Brahmachari Harischandra.

The circumference of this Dagaba is 900 feet and its height is 150 feet. There was a relic treasure festival in 1933 and the tower was laid on the full moon day in June 1940.

There is a record of sixteen carvings in the courtyard of the Ruwanweli Stupa in Anuradhapura in 1873, a century before the present work. It includes a lion, a horse, two elephants, a pillar with a fish carved pillar, a pillar with a Dharma Chakra, a three-pronged carving and many artefacts with stone tablets.

This is contained in the courtyard of the Ruwanweli Stupa. It is 1000 feet high and 180 feet high. This stupa is also known as Mahathupa, Swarnamali and Ratnamali.

Popular posts from this blog

October 18, 2020
The Sri Maha Bodhi holds a unique place among the sacred objects revered by the Sinhala Buddhists. In 246 BC, at the request of King Devanampiyathissa, Emperor Dharmashoka of India sent the southern branch of the Sri Maha Bodhi in Buddagaya to Ceylon by his daughter, Sangamiththa Thero. It was brought to Sri Lanka on the instruction of Ven.Mahinda Thera. The Mahavansa states that the land where the Sri Maha Bodhi is located was consecrated at the feet of the Buddha. For that reason, Mahinda Thera decided that this place was the right place to plant the Bo Tree. Buddhists pay the same attention and respect to the Sri Maha Bodhi as the living Buddha. Four annual festivals are held for the Sri Maha Bodhi. These are the New Rice festival, the old year festival, the Nanumura festival and the Karthika festival. In addition, the compound is swept clean daily, the temple is littered with dead flowers, and the flowers saddle is cleaned. The oblation is accompanied by the Hevisi Sound. E
Post a Comment
Read more

October 19, 2020
The ruins of Lovamahapaya are located to the east between Sri Maha Bodhi and Ruwanweliseya. There are 1600 pillars in 40 rows with 4 pillars in each row. This is considered as the Chapter House of the Maha Vihara. King Dewanampiyathissa built a Chapter House for the monks to recite the Pathimokka once in half a month, and King Dutugemunu made it nine storeys and had copper metal roofs. There are 100 booths on each floor. It is said that at that time Lovamahapaya was seen by those living in Dimbulagala near Kasathota, a distance of nine yoduns from Anuradhapura and a one of yoduns in the sea to west. During the reign of King Saddhathissa, a lamp was turned over and it was reduced to seven floors due to fire. During the reign of King Sirinatha 2 [ 246- 247] it was also built on five floor due to fire. King Kithsirimevan [ 301-328] repaired it as it was also damaged during the reign of King Mahasen. The renovations have continued and the last ruins of the 12 th century have been
Post a Comment
Read more